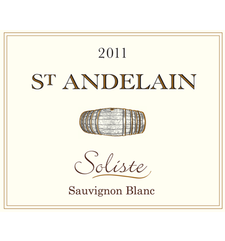 St Andelain is our homage to the incomparable late Didier Dagueneau. Born from a single organic vineyard, the grapes were destemmed and allowed 36 hours of skin contact to create unique richness and depth. After pressing we barrel fermented and aged for 16 months in Didier’s creation, the Cigar Barrel. There is no malolactic fermentation to preserve acidity, verve and length.

The nose is extremely bright with exotic aromas of stone fruits with a clear whiff of sea brine, oyster shell and flint, spiked with white pepper and chalk. The aromas are followed seamlessly from the nose by a fresh, nervy taste of tart nectarines, guava, apricot and melon giving the wine fantastic vivacity. The middle palette carries on with aromas of pears, white peaches, minerality, and flint, offering an incredibly high pitch, very tense, brisk and long in the mouth. The generous complexity of high tone citrus, grapefruit and kaffir lime peel and razor sharp mineral acidity creates a stunning long, very long soprano finish.