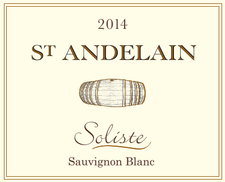 St Andelain is our homage to the incomparable late Didier Dagueneau. Born from a single organic vineyard, the grapes were partially destemmed and allowed 36 hours of skin contact to create unique richness and depth. After pressing we barrel fermented and aged for 16 months in Didier’s creation, the Cigar Barrel. There is no malolactic fermentation to preserve acidity, verve and length.

Le Regard / The Look
Superbly crystalline in the glass with vibrant citrin gem tones, expressing a wine of great vivacity and depth.

Degustation / The Taste
On the palate, the wine delivers very chiseled taste of tart green apple, quince, waxy star fruit, oyster shell laced with prominent lime zest notes. The middle palate is of contrast: racy, nervy yet elegant and textural, with stone fruit pit, guava, wet hay, and grapefruit aromatics. The minerality and salted sea brine takes hold in the mouth, magnifying the weight of the fruit, layered with honeycomb and citrus. The long finish is razor sharp, refreshing, accented with kaffir lime and grapefruit peel creating a wine of great verve and elegance.