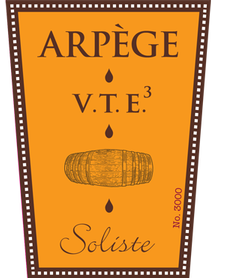 A most decadent release from the masters of complication

When we started Soliste in 2005, it was all and still is about our infatuation for great Burgundies and Pinot Noir. We produced our first wine, Sonatera, a mere 136 cases and we simply thought that this where we would be for years. Producing a few cases that we would share with our friends, family, and a few special restaurants where we like to dine. The key words in the aforementioned sentence is “we simply thought,” just shows how naïve we were about our complete lack of ability to have just stopped there.

The vintages following 2005 were all about Pinot Noir, and a decade later we produce a complex and unique line up of MonoClone® Pinot Noir that truly represent the Monastic ideal of ancestral Burgundy. To even attempt to craft and release Pinot Noir from a Single Vineyard, Single Clone, aged in Single Cooperage house from France, was hardly a “simple thought.” We became the Masters of Complications, but the risks paid off.

Our Pinot Noirs are the Pillars and Keystone of Soliste.

Great wines are not meant to be hidden deep in wine cellars; they are not a stamp collection. Great wines are the Ambassadors that bring complete strangers, friends, and family together at the dinner table for a memorable night of legendary food, wine, and laughter. Soliste was most and foremost created for these special moments, and so as our chef friends asked us to put together wine dinners, we realized that we did not have the diversity (only Pinot Noirs) to have a tasting menu with wine pairing. A “simple thought,” became very, very complicated.

In 2008, we created our first syrah, Out of the Shadows followed by La Sauvage, then two Sauvignon Blancs, including St Andelain, inspired by Didier Dagueneau and aged 16 Months in the cigar shaped barrel, two Chardonnays from Russian River, Les Cailles and L’Age D’Or, and of course more Pinot Noirs, and more Pinot Noirs, some of them a single barrel release… a “simple thought” indeed.

By this time, as things were not complicated enough, and after one of those long wine dinners, where guests and friends, always ask “What’s next at Soliste???” Sacrebleu! If sanity had only prevailed (or a glimpse of it), but NON!, and in our state of Ecstasy and Delirium accentuated by a “simple thought,”, lightning struck…But of course, we are missing a Dessert Wine.

So in 2012 we decided to create a late harvest Semillon Botrytis -- Noble Rot -- in the method of Chateau d'Yquem (we have our benchmarks). Our expectations were very, very low, as we felt that very few climatic conditions could allows us to pick at high sugar levels with Botrytis, especially with the late rains and dense fog in November. We picked on November 27, 2012 with almost no yield or juice left in the grapes. This was the beginning of a very expensive project. After fermentation and racking, we decided that this wine will have to be aged a very long time (more expensive) and so we forgot about it. When we picked 2013, on November 11, we did the same, forgot about it, and then in 2014, Claude had an epiphany. "Let's make a Solera! We'll begin to combine these wines together in Dagueneau Cigar shape barrels and in decades some of our first vintage will be present to connect the future with our past.” Needless to say, no one would be as mad to go to the expense of crafting a late harvest wine (minuscule yields) and then combine vintages to age for Years, Decades, but all you need is a “simple thought.”

And so we did. But was that enough? Non! As Claude often says, "If it is worth doing, it is worth over-doing."

To preserve the freshness, add complexity, and to keep the wines as natural as possible, we fortified our yet to be named wine with locally produced artisanal Brandy (or Cognac as is called when you make it in, Cognac) made from cousins in nearby vineyards. The Brandy was complex and very floral and reminded it us of the original Napoleon Cognac made with Folle Blanche. We had many taste tests to make sure we had just the right one. It is hard work.

Our first choice for this wine’s name was Elixir V.T.E.3, It was, we thought a fitting name for our magical wine. Elixir! That's it… a “simple thought.” Unfortunately, the warning we received from “The Law” said that wine names cannot imply medicinal qualities. That was exactly our point; This Wine is “Medicinal,” it will make you feel better, a lot better, we explained to no avail. For a wine that brings such joy, those that regulate it seem devoid of humor.

Arpège was chosen to truly reflect the nature and the process of this amazing and unique wine, So many layers of complexities and precision just as the Arpeggio notes are played individually to create a complex rhythmic scales when assembled with other instruments. Arpège is also a 3 Star Michelin Restaurant in Paris.

As for the letters V.T.E., Vendanges Tardives Exceptionelles, they will wear a number to determine how many vintages of the solera were blended. Or so we thought when we lost count and added another vintage... By the way, V.T.E. was inspired by our favorite digestive, Chartreuse V.E.P. (a Legendary Elixir made by the Monks in Voiron) which stands for Vieillliessement Exceptionnellement Prolongé.

The wine is extremely complex with exotic floral aromatic, honeycomb and stone fruit pit, dense without being heavy, superbly balanced. The food parings for this wine are limitless; exceptional with Foie Gras, and pork belly, tuna tartare, risotto with white truffles (if one need to suffer) and exquite with cheese and walnuts (aged mancheco or brillat savarin). It is also quite fabulous as an aperitif and of course with dessert (roasted pears with crème fraiche ice cream). This is a festive wine that will make your holiday season sparkle.